The Supreme Court’s reversal of Roe v. Wade amounts to nothing less than a shameful, sweeping, right-infringing decision that will have life-changing, even life-threatening, consequences for women and others who may become pregnant.

The decision revoked the federal constitutional right to abortion and profoundly affected the survival of women and social stability.

Forcing someone to conceive and give birth against their will can have devastating effects, breaking their course of life, education and career plans and throwing them into a future they never wanted or imagined for themselves.

It also undermined women’s reproductive decisions, deprived them of control over their bodies, and destoryed abortion rights that have stood for a half-century. Those who support the decision are not aware that this will continue to erode women’s rights and living space, making gender equality backward.

According to legal status of abortion regulations by state as of August 2022, collected by CouponBirds, twelve states had full bans on abortion, as well as those required for rape. Three states currently allow abortion up to 15,18 or 20 weeks of pregnancy. In the rest of the states, abortion is legal or legal temporarily but may still be restricted, or access may otherwise be limited. Nine states are temporarily suspending enforcement of anti-abortion laws. Abortion is legal in thirteen states and legal but limited in seven states. 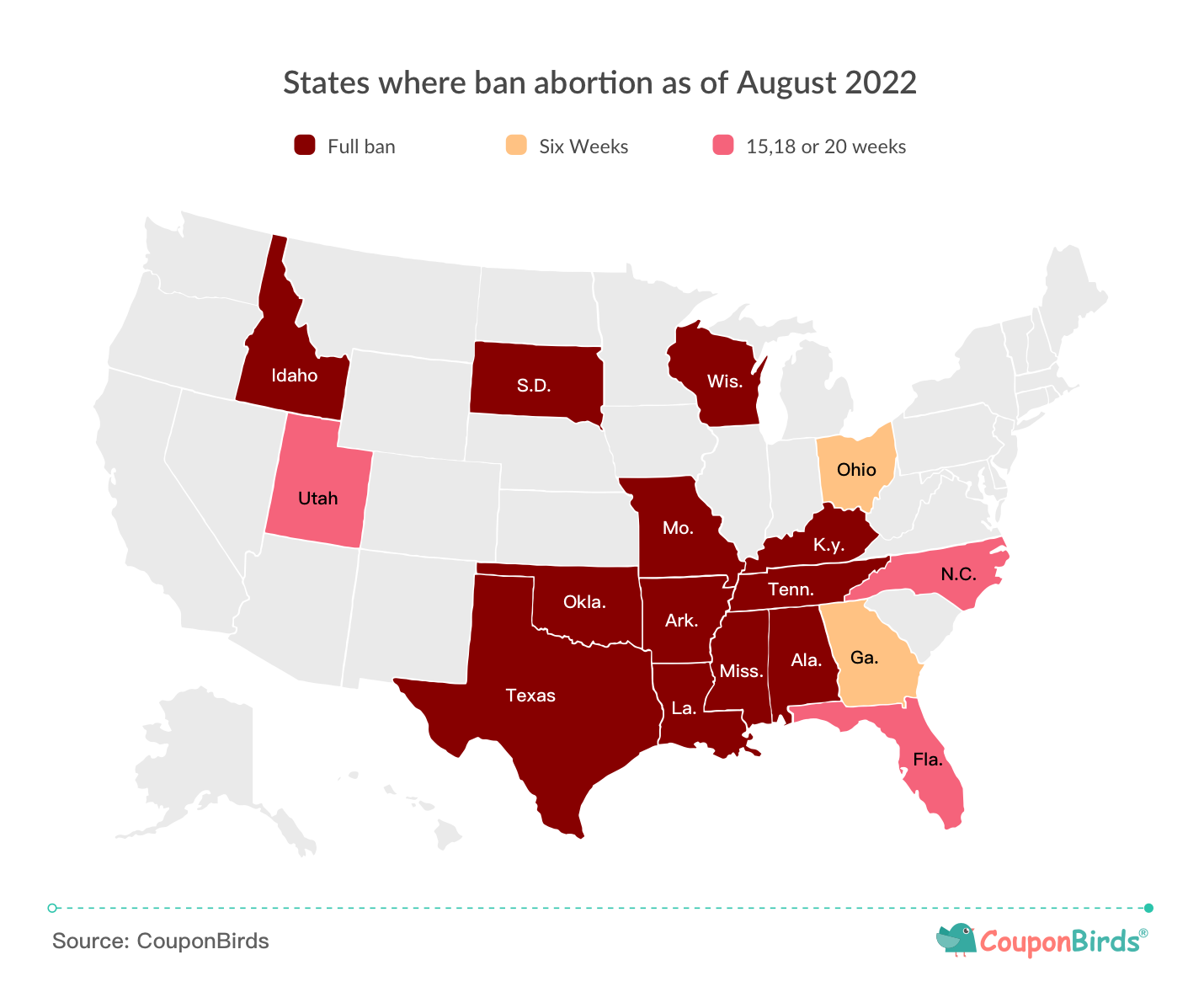 Why can’t abortion be banned?

Contrary to public belief, abortion is quite safe under qualified procedures. Abortion is a mild, minimally invasive, and brief procedure with low mortality rates, when performed legally by a trained medical professional from an accredited and qualified institution. Elizabeth Deans wrote an article showing the safety of abortion, stating that “…an overall abortion mortality rate of 0.7 deaths per 100,000 legally induced abortions. This rate is much lower than the mortality rate for pregnancies that end in live birth: 8.8 deaths per 100,000 live births”. The mortality rate from abortion is much lower than that from live births. Forcing a woman to choose parturition rather than termination can be far more lethal.

If life is so important, why not consider pregnant women and women who are certainly alive first? In some states, women who become pregnant involuntarily, such as through rape, are banned from having an abortion, which really hurts human rights. Don’t these women who do live matter? When a woman is not ready to raise a child, is forcing her to have a child really respecting life? Women or couples who are unprepared and suddenly have a child, can they really love the child properly?

Unwanted children may suffer neglect and feel unloved with poor quality of life because the pregnant woman cannot afford it. This will lead to a series of heartbreaking social problems, most likely leading to increased rates of childhood depression and suicide, and possibly to increased cases of baby abandonment.

Who will be hurt?

The first is women. Sudden pregnancy and childbirth can cause health risks and economic burdens for women, and turn women’s education, careers and lives upside down. That makes it more difficult for women, especially black women, women of color, young women and women with disabilities, to move up in society and out of poverty. Banning abortion will exacerbate the rich and poor and harm the healthy development of the economy.

If a woman with an unwanted pregnancy takes an abortion, she must go to a state where abortion is legal. An abortion costs women not only more money, but also a lot of time, which disrupts their education and work and deepens discrimination against them by those around them.

In many states, abortion will become an underground practice, usually carried out by people who lack the abortion expertise, sometimes in unsanitation conditions. We will see that some women have to do self-abortion, cause complications and even death.

Some clinics have stopped providing abortions to avoid legal risks even if laws haven’t officially taken effect. In states where abortion is still legal, wait times are increasing sharply as out-of-state patients travel to seek abortion services. This causes dangerous delays for patients with serious pregnancy complications such as miscarriage, ectopic pregnancy.

Anti-abortion is a decades-long campaign, and anti-abortion politicians are designed to ban abortion across the country, and they will not be content with the status quo. If there is no effort to struggle for abortion now, it will be closer and closer to the national ban on abortion.

Adminhttps://businessinsiderasia.com
Previous article
Health Benefits of Frankincense Powder
Next article
What is a Nantucket Style House?